Album Covers That Changed My Life

I love album covers, especially on vinyl LPs.  Narrowing my list down to eleven wasn’t easy.  To do so I had to omit thousands of my favourites, among them the homoerotic Teutonic imagery of Accept and Rammstein, the loincloth-clad would-be warriors Manowar, the nonchalant symbolism of Scorpions, the eerie imagery of Venom, Mercyful Fate, King Diamond and Blue Öyster Cult, the razor blades and metallic robot creatures of Judas Priest, the masking-tape-nippled, cameltoe-pantied, oiled-up, chainsaw-wielding anarchisexuality of Wendy O. Williams, the two-steps-from-transexuality preening poseurishness of LA glam metallists, the otherworldly wonder of Magnum’s Rodney Matthews artworks…you get the idea.  These eleven are not necessarily my favourite album covers, but they are the ones that, for reasons which will be explained, had the biggest impact on me.

My equal-favourite album of all time (the other being Zodiac Mindwarp and the Love Reaction’s Tattooed Beat Messiah).  Its cover affected the 10-year-old me in a visceral way when I saw it for the first time (on a snowy winter’s day in an East Kilbride record shop called Impulse).  I picked up the vinyl LP and – after a few minutes of staring at both sides of the cover – walked to the counter shaking with excitement and bought this chunk of high-voltage riffage.  Walking the mile and a half home through the snow, I gazed at the cover in amazement: on the front Angus is impaled by his own guitar while Bon looks over his shoulder like a demon; on the back Angus is face down and dead, a Gibson SG headstock jutting from a bloody exit wound, and Bon nowhere to be seen (prophetic, as Bon was to check out of this world soon afterwards).  And the sound? Immaculate!  From the roar of Glasgow Apollo’s crowd (the greatest gig venue I’ve ever set foot in) to Bon’s banshee screams on High Voltage to the never-bettered guitar tone of Angus and Malcolm Young, the energy levels on this album are higher than any ever captured on record before or since. 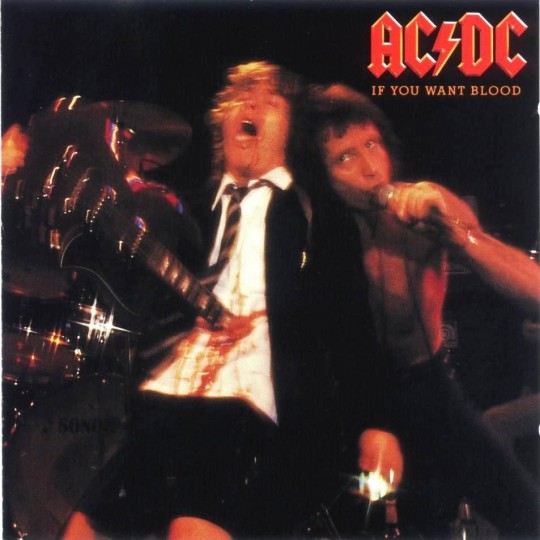 This one shouldn’t need explanation.  The band image – equal parts biker, bandito and shoot-you-in-the-back bastard – was perfect.  This cover didn’t just convince me to buy the album: it inspired me to buy a bullet belt, too.  Little Filthy Phil Taylor was the scuzziest-looking thing I’d ever seen, so naturally I loved him! 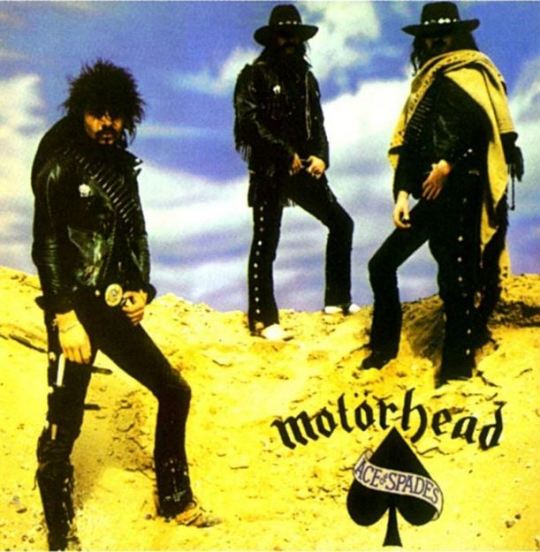 This cover scared the bejeesus out of me as a child.  I was afraid of only one thing back then: witches.  I’d fight any boy, man or beast.  I’d boot a vampire in the balls if he crossed my path.  I’d set a werewolf on fire if he bared his teeth at me.  Witches, though, were a different story.  They terrified me.  The spectral female figure on the front of this album looked like a definite witch – the scariest I’d ever seen: a pant-shittingly frightening wyrd woman who would haunt my dreams and rip out my soul if I so much as dared to play the album.  So I played it over and over, staring at the cover for hours, certain that facing my fears was the only way to banish them.  The building on the cover is Mapledurham Watermill.  I’m happy to report that it hasn’t changed much.  With a bit of Crowleyesque jiggery-pokery, some Satanic slap and tickle, and a shamanic forest dance (or, if you prefer, a short walk from the car park), you can look upon the watermill from the same angle as the cover photographer did back in 1970. And if you’re lucky, a pale figure in black might appear on the water’s edge… 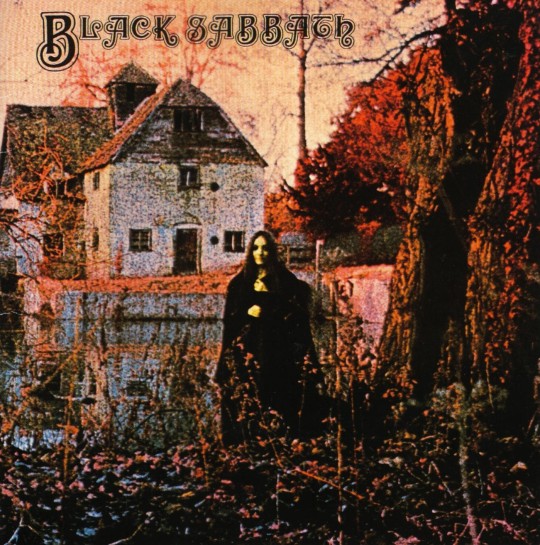 Symbolism run amok.  In the background a man waves, unaware of the approaching tidal wave that’s about to wash him away.  In the foreground a woman with a demi-wave hairstyle smiles as her skirt flutters in waves, offering the viewer a cheeky glimpse of panties.  Genius. 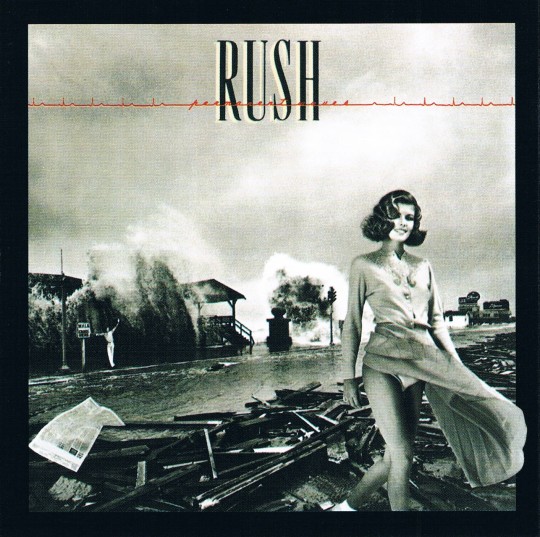 The most numinous of these eleven, Nightfall‘s cover features the Thomas Cole painting Old Age.  If you fancy a look at the original, pop over to the Smithsonian Institute and have your mind blown by this spectacular piece of art.  For me, it provokes memories of early childhood with its Sunday School, biblical parables, and pondering the existential mysteries of the Universe. 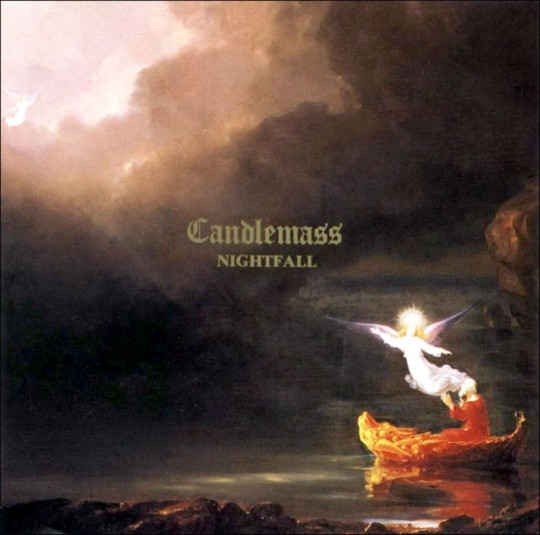 The cover features the giant heid of Ian Gillan…carved into rock!  Ritchie Blackmore’s there too, as are the other three legends from the Mark II lineup of Deep Purple (Roger Glover, Ian Paice, Jon Lord).  Based on the larger-than-life sculptures on Mount Rushmore (where the heads of American presidents Washington, Jefferson, Lincoln and Roosevelt are hewn into the rock), this cover goes one better by having five heids.  And even an idiot knows that five heids are better than four.  As a child, I found this vinyl LP in a Menorcan record shop during a summer holiday.  Nearly pissed myself with excitement.  Bought it on the spot.  Iconic. 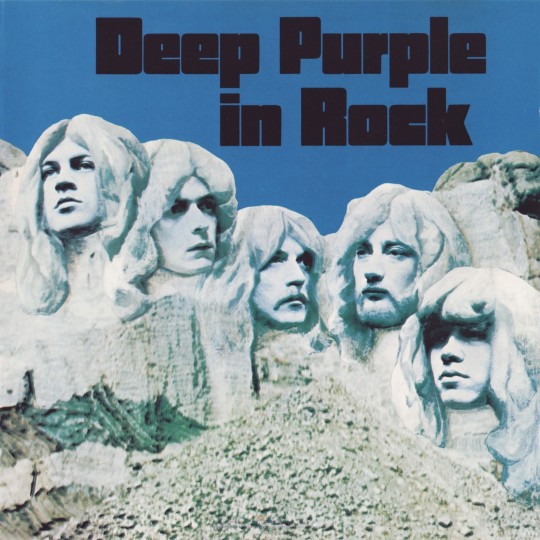 Like AC/DC’s If You Want Blood (You’ve Got It), this cover uses back and front to deliver its message.  For the full effect, take the gatefold vinyl album, open it and enjoy the wide landscape art (by Rodney Matthews, who also created legendary covers for rock legends Nazareth and Magnum, among others).  Of all Rodney’s work, this is the piece I find most captivating. 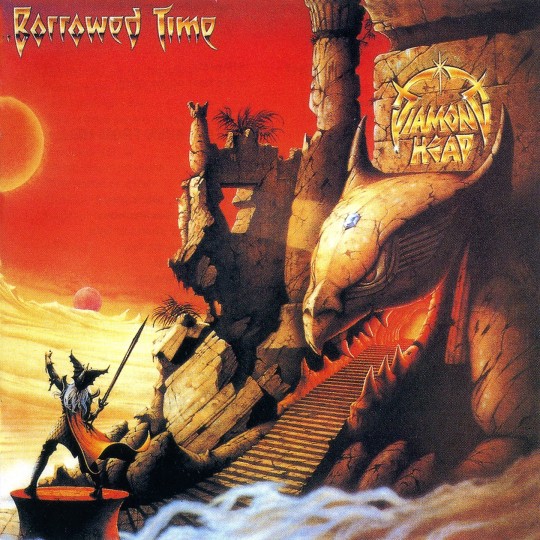 When artist Derek Riggs created Eddie ‘the Head’ (Iron Maiden’s now-famous mascot, who has graced all the band’s covers – albums and singles – evolving through many incarnations along the way) he couldn’t have foreseen the enormity of the impact his monster would have on heavy-metal culture and identity. Derek’s body of work is now legendary, his character Eddie the universally recognised figurehead of the Iron Maiden juggernaut.  Each Maiden cover has breathtaking attention to detail, little flashes of self-referencing humour, and a unique mood.  I find the cover of this, their debut album, hypnotic.  The scene communicates an eerie and palpable sense of nocturnal danger.  As for Eddie, is he a punk or a metalhead?  Is he alive or is he dead?  Is he friend or foe, or sexual pest?  Or all of the above, like some Schrödinger’s zombie?  These are the things I’ve wondered as I’ve gazed into his eclipse-in-the-abyss eyes.  An utterly inspired cover with unparalleled atmosphere.  I can’t get enough of it. 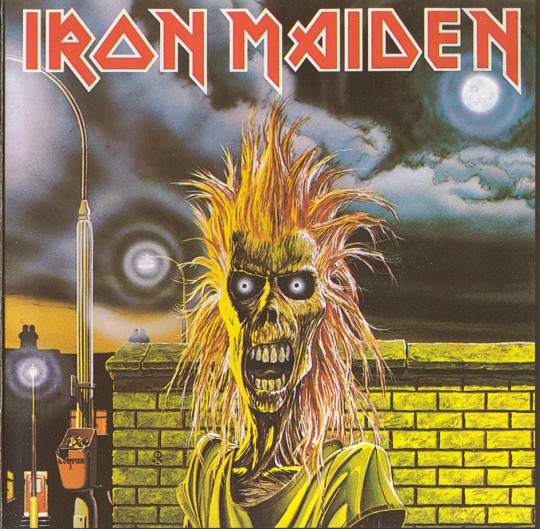 Pick up a copy of this on vinyl and look at the cover.  See it.  There are over 20 tortured faces in the clouds and sea.  The more you look, the more you’ll see.  I’m still finding new ones and I’ve had the album since its release in 1990.  Beautifully symmetrical logo in blood-red font.  Hooded dark wraiths.  Stolen heart wrapped in black thorns.  A beautiful inversion of Christian iconography. 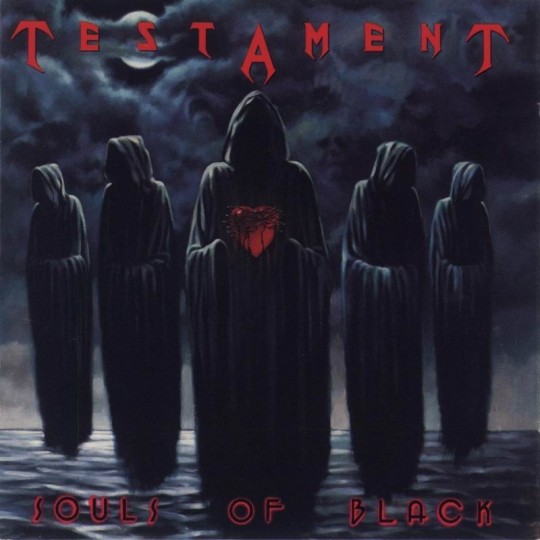 It’s difficult to look at this cover without contemplating the destruction mankind has wreaked on Mother Earth.  Job done, Monsieur. 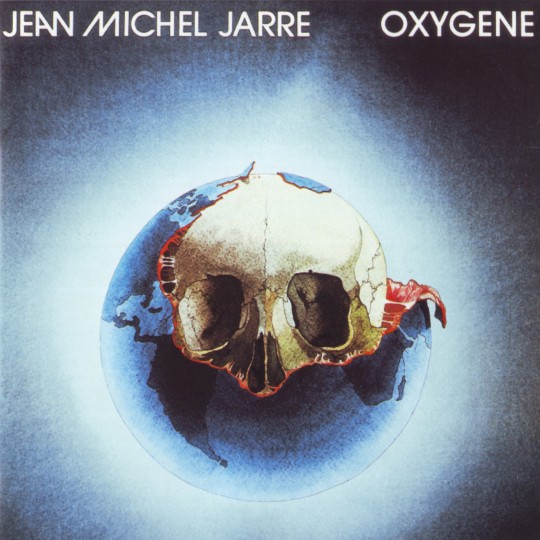 One of my favourite albums and a cover to match, courtesy of longtime Floyd collaborator Storm Thorgerson (RIP, you transcendent genius).  Division and union in one scene: an eternal paradox.  A metaphor for the Universe.  The building in the background is Ely Cathedral.  If you fancy seeing the giant heads, go to the Rock & Roll Hall of Fame and Museum in Cleveland, Ohio.  They’re above the entrance to the museum’s third floor. 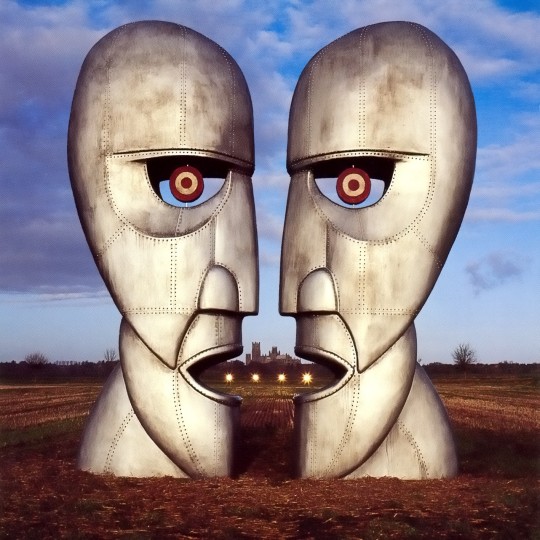